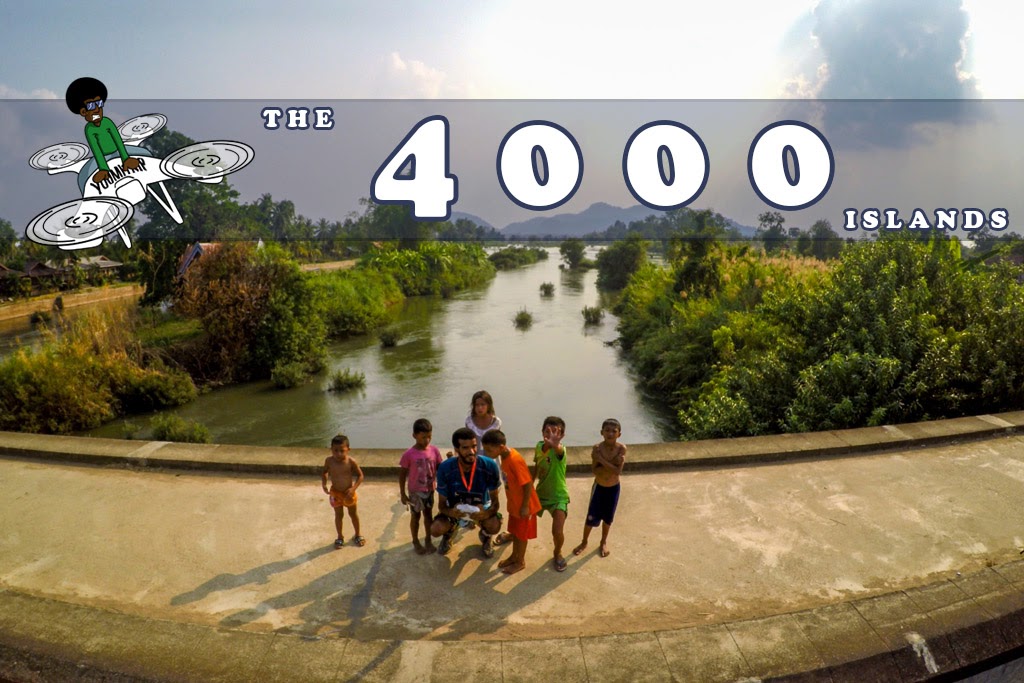 I entered Laos from Vietnam by the most southern border crossing between those 2 countries. I spent my first night in Laos in Attapeu, then went to Pakse before heading south to Don Det on the 4000 islands.

From Pakse, it is a 140km ride to Naka Sang, where you can take a boat to get to Don Det, the most popular island of the 4000 amongst backpackers. Technically you cannot get to all 4000 islands because the smallest patch of grass sticking out of the water counts as an islands. But it does not mean the places is not very pretty. It cost me 70 000 kip to put my motorbike on a small boat. It took around 10-15 minutes to cross to the island. You can probably bargain a cheaper price, apparently it also depends on the CC of your motorbike.

Once on Don Det, there is 2 main streets, - which are actually small dirt path - Sunset street on the western side of the island and sunrise, on the eastern side. I just drove down sunset street and passed by plenty of guest houses with bungalows facing the river. You won't have any problem to find one, it's just a matter of finding one that you like. I'm fairly easy so I just stopped randomly in front of one that looked nice. It was not straight on the water but it had a nice front yard and the bungalows were neat inside and had a hamac - they pretty much all have one anywhere you go - I do not even remember the name of the guest house, it was something like "Noon at midnight" but I cannot swear that's actally the name. I paid 50 000 kip for a bungalow with my own bathroom.
There, I met 2 German girls and an English guy and in the afternoon we went to the LiPhi waterfall. It was about 4:30pm and at this time the light was starting to look really nice and I took some pretty good footage of the waterfall with my drone. The entrance was 35 000 kip which is quiet expensive but the waterfall is really beautiful, I think it's definitely worth checking out. The Li Phi waterfall is on Don Khon island, south of Don Det and connected to it by a bridge. You also have to pay for everyday you cross the bridge which I think is just ridiculous, and it's 15 000 kip, for one day it's fine, but if you cross everyday for 3 or 4 days, that's a budget. You can also just keep walking or riding by, that's your call. We then went for a drink and some late lunch / early diner back on Don Det at the Kong bar on the sunrise street. 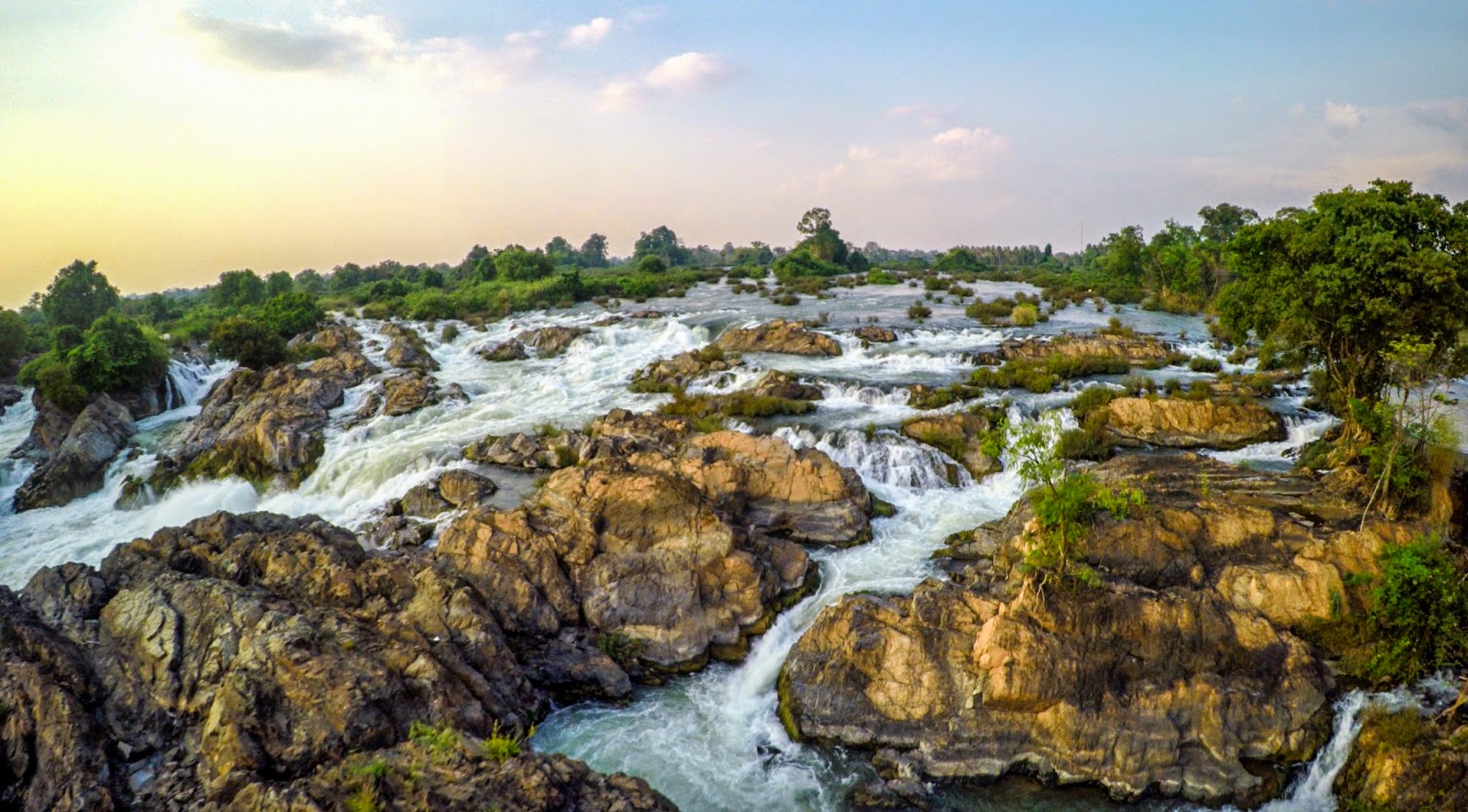 The next day was very hot, I was sweating just laying in the hamac. But I wanted to do something so I decided to go for a walk anyway. As you can imagine I took my drone with me and I walked to Don Khon island - no, I did not pay the bridge this time. I took a path that goes into the island, and as soon as you leave the main street that runs along the river, there is nothing else. I was walking in the middle of what probably is rice fields in the wet season but at this time it was just dirt. After a while the vegetation got more dense and I was walking in the middle of small trees and bushes, it all looked really dry. Then a sign "waterfall" interested me, and althgouh the way took me back a little, it was not too long I walked by a small cafÃ©, crossed a suspended bridge and walked a bit more to a nice waterfall. Some locals were building some wooden structures in the Mekong river, probably preparing the fishing for the wet season. Although the waterfall looked really nice from the ground, from the drone it takes another dimension and the term 4000 islands really makes sense. There is thousands of small islands and patch of grass all around the river, it really is something. On the way back I bought another bottle of water at the small cafÃ© and kept going to the most southern point of Don Khon island. After another 15 minutes, I ended up in front of a broken wooden bridge... Not willing to head back I decided to try to cross anyway. It involved at bit of climbing but nothing unsurmontable and the structure was still solid. After that, I reached my destination. Nothing special about it except that you can see Cambodia from there, it's very close. So I took out my drone, and I think I managed to fly far enough so it actually crossed the imaginary border. My drone travelled one more country than me on that trip :-)

I went back by another path and stopped at the bridge between the 2 islands to take some aerial footage. It obviously attracted kids and I quickly a small audience around me. I love to see kids being so excited to see this small helicopter flying, and when I make the drone face them and they can see themselves on the fpv screen, they just love it.
Back at the bungalow I was exhausted and so sweating, I decided to go for a swim. The English guy and one of the Germans joined me and we went to a small "beach" - more of a little patch of sand near the river - and just went into the water to relax. And that's one thing I really enjoyed about the 4000 islands is the relaxoing bit. There is a lot of travellers on both islands but it's fairly easy to walk somewhere quiet and find yourself a nice spot to swim in the Mekong. 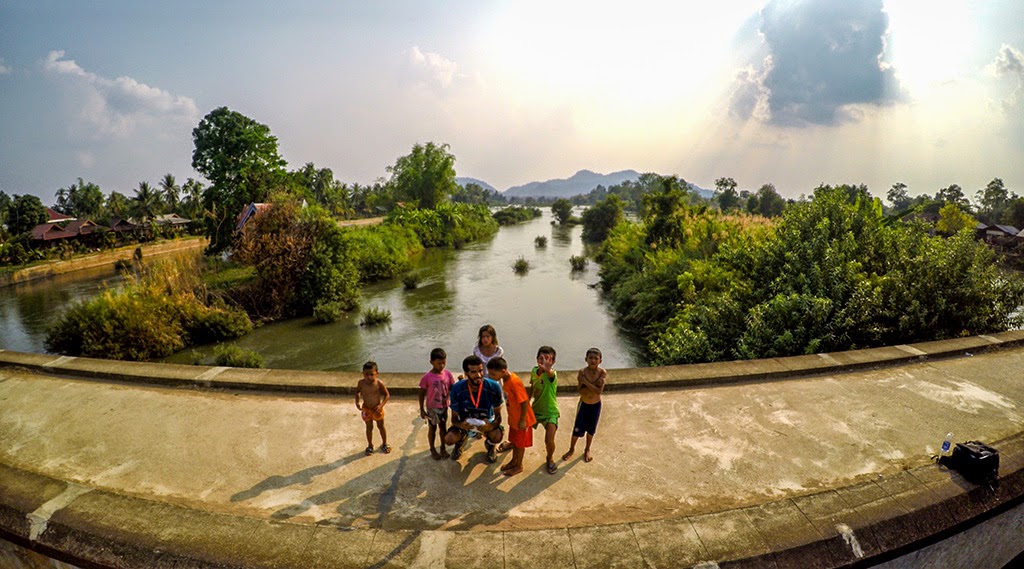 For my 3rd day I went to the Khone Phapheng Falls with 2 of Germans I met a few days before. We first took a small boat to the main land then a tuk tuk for the 15-20 remaining kilometers. It was not a really enjoyable ride, very noisy and not so comfortable but at least it was a short one. The entry fee is 55 000 Kip for foreigners... and 20 000 for locals. Once inside you have to take a shuttle that takes you to the view point, or you could just walk there, it's just a few hundred meters walk. The waterfalls are really impressive, they are the biggest in southeast Asia in terms of water volume. Even in the dry season, it is worth visiting. I flew my drone over it and got some nice close footage of it all. There is not much else to do there so an afternoon is more than enough to spend there.

Second part of my journey backpacking with my DJI Phantom. ...

From Luang Prabang, to get to Thailand I heard that it was possible to get on a slow boat. Although I had been told the trip takes 2 days with an overnight stop in Pakbeng I wanted to try it. And inde ...